Value investing set to snap back

Jason Kim, Portfolio Manager & Senior Analyst at Nikko AM Australia provides insights on recent trends in performance of value versus growth investing - and why he believes after a period of underperformance, value investing is set to return to favour.

All other countries
Share this
by Jason Kim, Portfolio Manager
13 April, 2016

Jason Kim, Portfolio Manager & Senior Analyst at Nikko AM Australia provides insights on recent trends in performance of value versus growth investing - and why he believes after a period of underperformance, value investing is set to return to favour.

The last two years, and in particular the 2015 calendar year, global financial markets have been in “risk-off” mode, with investors concerned about the lack of economic growth around the world, including Australia.

Stocks that have performed well during this period had the following attributes:

In a “risk-off” environment, typically the focus on valuations falls by the wayside and many investors chase “safety” at any price. In this environment, growth and quality managers tend to perform well, while value managers typically underperform.

The chart below looks at the various financial markets around the world (including credit and equity markets) to assess whether the markets are assuming “the world is over” or “everything is rosy” scenario. This is about the psychology of investors, where fear and greed can drive markets, and where disciplined value investors can take advantage of this over time (although the timing may not be perfect). 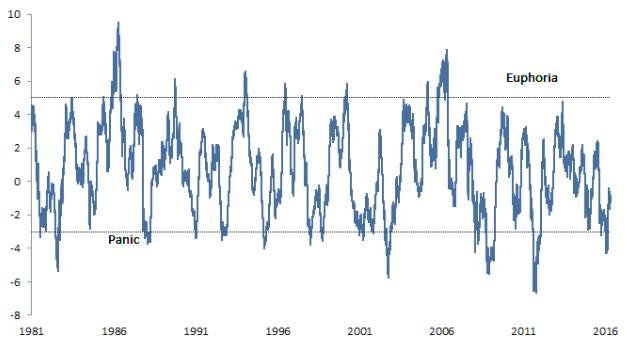 As chart 1 shows, fear or “panic” has dominated financial markets in the first few months of 2016. These extreme moments of fear and greed (“panic” and “euphoria”) do not last long, and eventually revert.

During periods of fear, investors chase quality, defensive growth and earnings growth at any price and drive valuations of these stocks to extreme levels as they are regarded as a safe haven, while shunning the rest of the market. These perceived ‘safe’ stocks can be driven so high in value that they become ridiculously expensive and even ’risky’.

Last year in particular saw this trend reach extreme levels (as shown in the following charts). Value managers have underperformed during this time, while growth managers have performed very well. However, we believe we could see this trend reverse soon.

Chart 2 shows the Price to Earnings (P/E) multiple of the stocks that offer dividend growth (eg Sydney Airport, Transurban, APA) relative to the market average. These stocks are seen to be high quality with growth in cashflows irrespective of economic growth. There is a price for everything, but they are trading at extremely lofty multiples. We acknowledge they are good-quality companies, but they are incredibly expensive and are trading at extreme levels which look difficult to sustain. 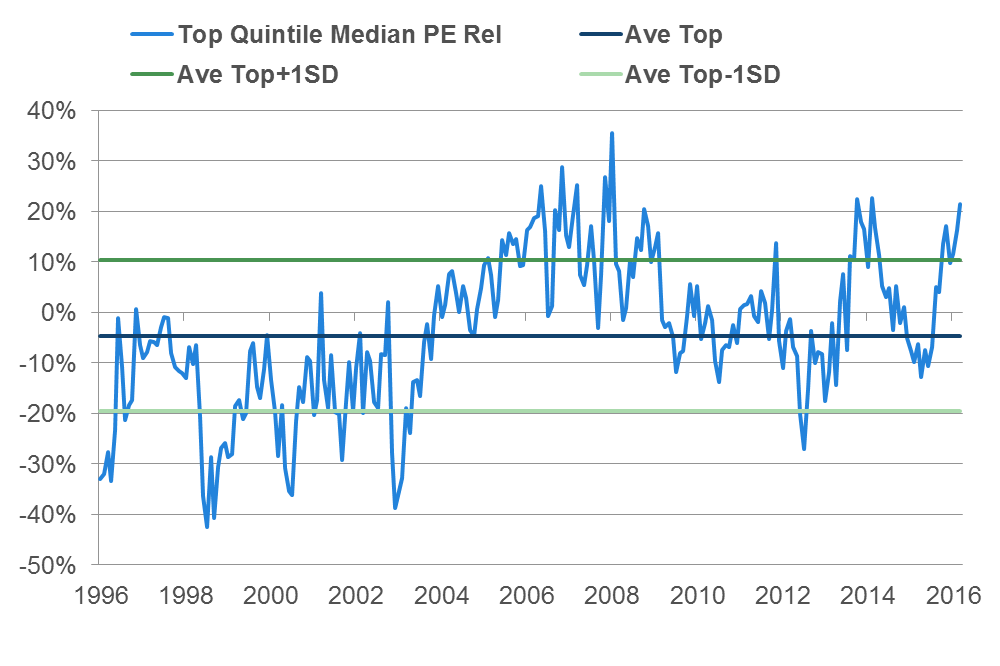 Chart 3 shows the same P/E relationship for those stocks with earnings growth (eg Dominos, Bellamy, Blackmores) and again they are trading at extreme levels - some are trading at around 60 times earnings and are priced for perfection as investors assume extraordinary growth over the next few years. The slightest disappointment will most likely see these stocks sold off heavily. 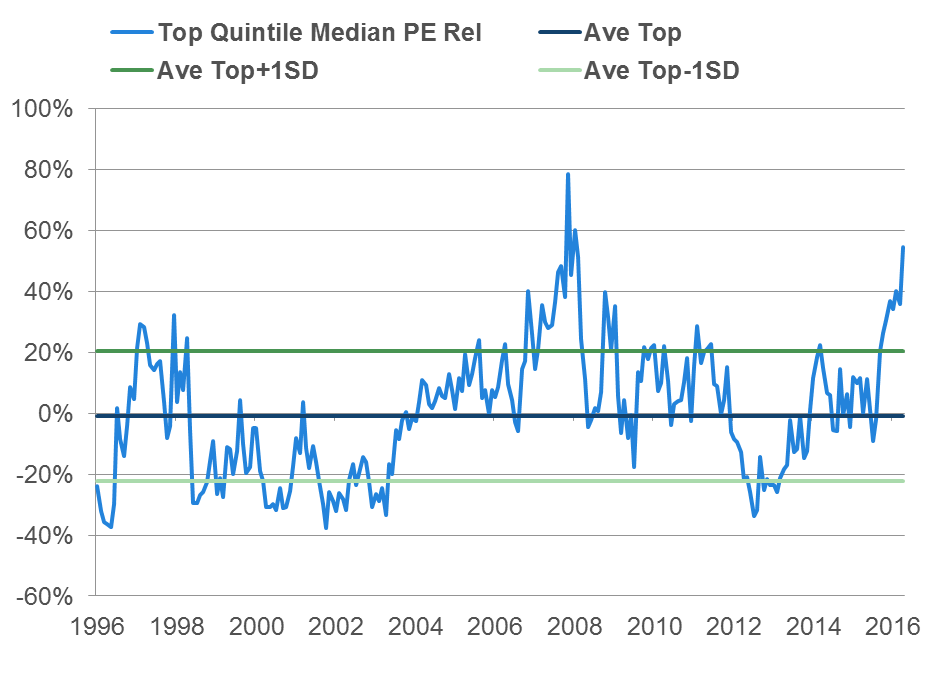 Similarly, chart 4 shows the P/E of ROE stocks, which is a proxy for “quality” stocks. This could include stocks already discussed above, but more generally are those companies that produce good earnings from limited capital outlay. Again they are trading at extreme P/E levels. 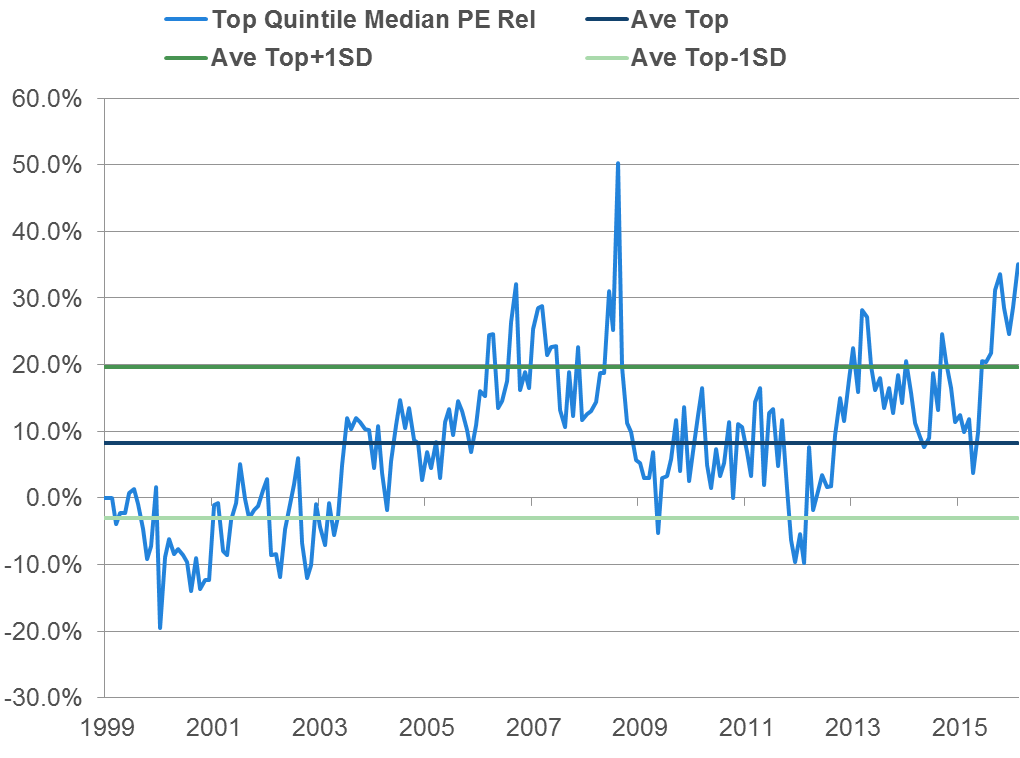 Value stocks have taken a beating

Value stocks are currently those “beaten down” stocks in industrial cyclical industries where earnings and/or the outlook have been impacted by concerns about the economy either locally or globally. We currently see incredible value in industrial cyclicals. Examples include Incitec Pivot, Fletcher Building and CSR. In addition, many parts of the Financials sector (excluding REITs) now look very cheap, again due to concerns about the economy as well as financial markets (obviously related to each other), and they include the banks, Lendlease, Henderson and IOOF. We have recently been buying more of the banks and moved from an underweight to modestly overweight position.

We often talk within our team about how the markets have forecasted seven out of the last four recessions. The markets will sometimes think the sky is falling in, but underestimate the will and the tools that central banks and governments around the world have to help address these concerns when they arise. Australia survived the global financial crisis relatively unscathed, but the equity markets had priced in quite the opposite scenario. Equally, concerns about Greece were overblown in 2011, with the European Central Bank implementing a host of policies to ensure that there would be limited contagion. 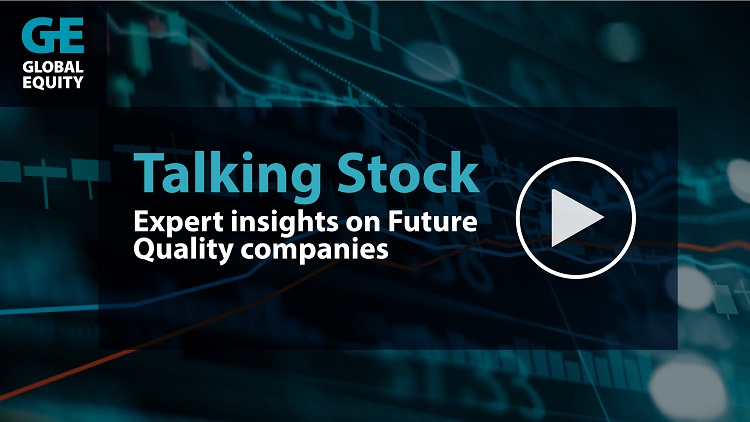 We are pleased to be bringing you Nikko AM's 2019 Sustainability Report. In it, you will read about our responsibility as an investment manager and fiduciary that contributes to a sustainable society, considering ESG as a part of long-term investment strategies.

Nikko AM has been certified as carbon neutral for the first time, after entering into a carbon offset programme with the UK-based international organisation Carbon Footprint Ltd.