What is the prognosis for Emerging Markets as major global central banks begin to tighten policy?

Emerging markets (EM) have been on a tear, originally lifted from the doldrums in early 2016 by China stimulus, but now self-sustaining with a synchronized economic recovery across emerging markets and Europe. Yes, the US has been hiking rates, but so far the EM recovery has remained durable despite bouts of dollar strength and rising treasury yields.

In this piece, we consider the potential impact on EM assets of the slowing expansion and eventual contraction in central bank balance sheets. In preparing to contract its own balance sheet, the Fed has assured markets “it will be like watching paint dry”, but our team is not sure of market stability as collective efforts to wind down global QE gathers pace.

CB balance sheets have been expanding continuously since the financial crisis, from US $5 trillion to nearly $20 trillion, shown in Chart 1, as CBs have been using asset purchases (QE) to ease policy beyond the capacity of cutting rates. Former Fed Chairman Ben Bernanke once stated that $600B in QE was equivalent to 75 basis points (bps) in rate cuts. If so, US QE since 2008 was equivalent to 4.5% in rate cuts beyond taking rates to nearly zero. Not surprisingly, on the prospect of reducing the balance sheet, policymakers estimate the rate hike equivalent to be much smaller, but the fact is no one really knows the degree of tightening impact. 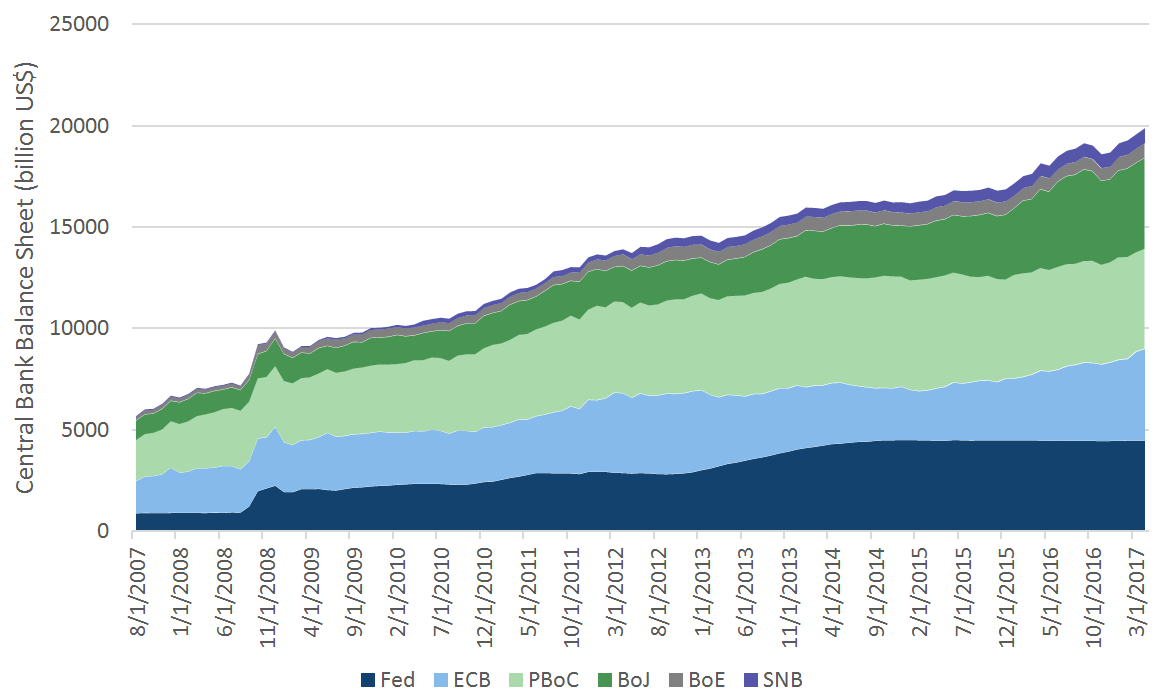 To date, the Fed has hiked rates by 100 bps and is currently aiming to start running off a small portion of the balance sheet later this year – starting at $10 billion a month, lifting the amount by $10 billion each quarter to a cap of $50 billion over 12 months. Markets didn’t seem to notice the ECB’s reducing its own QE by EUR 20 billion (from 80b to 60b, although such also entailed extending the QE program) back in April, so it is fair to assume that the process can start without much market fanfare. However, as the roll-off deepens with the ECB likely to start reducing its own QE in 2018, the cumulative effect starts to become meaningful.

The cumulative degree of QE easing (or tightening) can be measured as the 12-month change in aggregate central bank balance sheets – call it the QE impulse – shown in Chart 2. We also include in this chart a two year projection, based on the Fed’s balance sheet roll-off and gradual tapering by the ECB (assuming a 10 billion euro reduction each quarter starting in 2018). The projection is only an illustration as the specifics of ECB tapering are still unknown, but it makes the point that the QE impulse will decline considerably over the next two years. 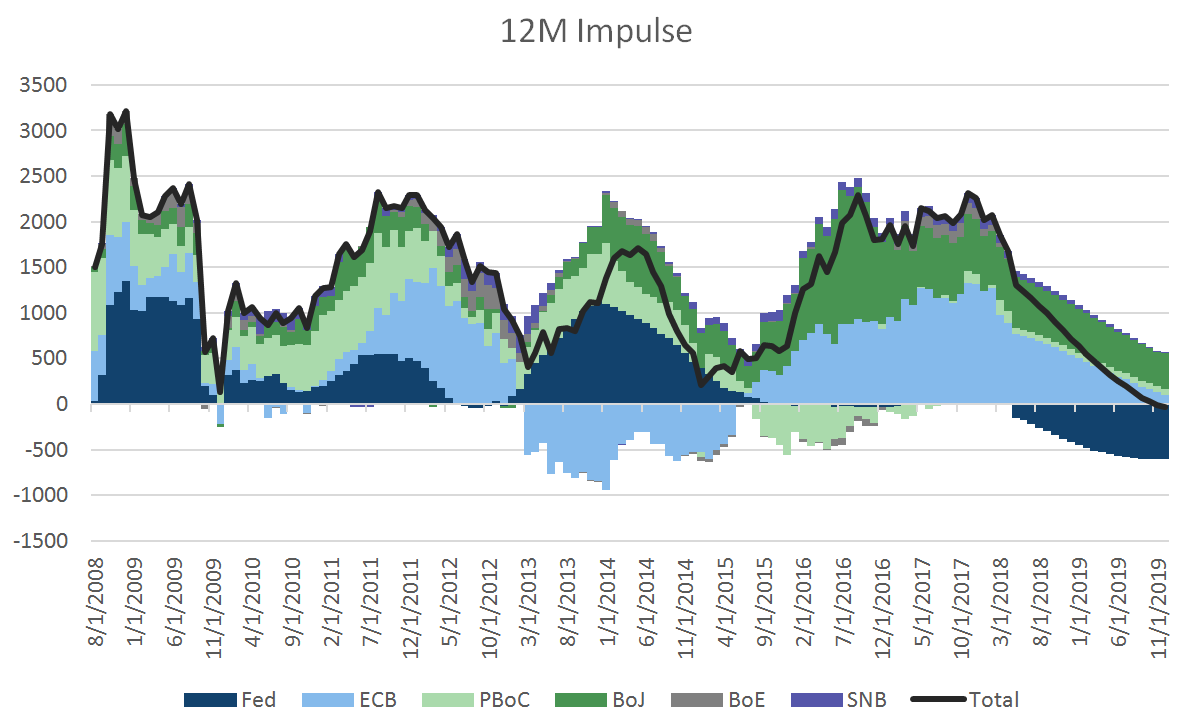 To lend perspective on the potential EM impact, we compare the QE impulse to global FX reserves in Chart 3, the changes of which tend to be dominated by EM, as reserves are used to manage currencies against capital flows. FX reserves and the QE impulse tend to move together where predictably accelerating QE adds to EM inflows whereas deceleration reduces inflows or can cause outflows. A declining QE impulse should eventually begin reducing flows to EM, probably starting next year.

The QE impulse is just one driver that tends to magnify flows based on changing liquidity, but fundamentals including global demand are the chief driver of growth prospects and, therefore, capital flows. The impulse decline in 2014 happened to coincide with sharp tightening in China initiated by its crackdown on shadow banking and corruption that led to a sharp decline in global demand.

Given the size and importance of China to global demand, China’s credit impulse, shown in Chart 4, is a useful barometer for measuring the prospective direction of global demand. The massive injection that began in mid-2015 transmitted to a lift in global demand by early 2016, which has since spread to a more synchronized global recovery that now includes most of EM and also Europe with many countries being lifted out of downturns that began five or more years ago. 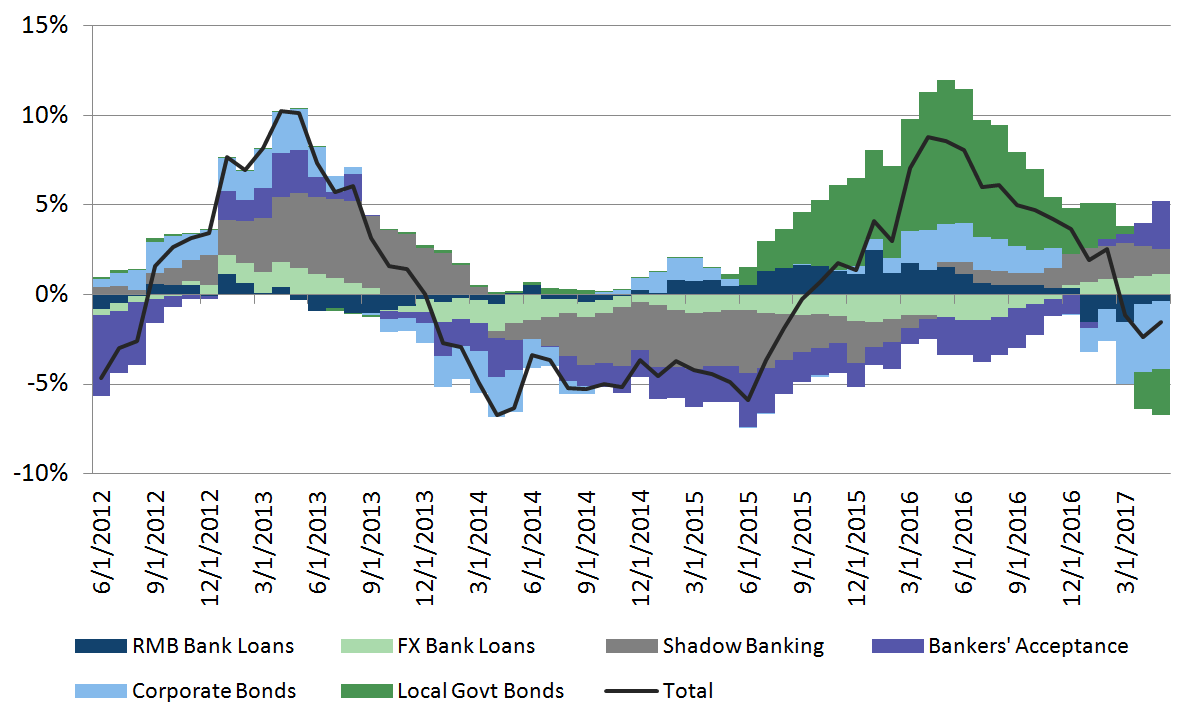 This year, China has once again shifted to tightening, mainly to curb speculative leverage through shadow banking which had the knock-on effect of slowing bond issuance. The tightening seemed to reflect across the commodity complex, where prices declined since January. There has been some debate as to whether the decline is purely financial in terms of reducing speculative leverage, or whether real demand has in fact slowed. It is difficult to say, but as the credit impulse has begun to lift more recently, commodity prices have found support and global growth still appears healthy. We attribute the resilience, in part, to the extent of the economic adjustment that completed in early 2016, with further tailwinds lent by varying degrees of reform, mostly in Asia.

Given the relative health of global demand, the recent sell-off in bonds is unlikely to turn into a broad risk off event that weighs on EM assets. We would remain cautious on duration, but selectively less so for EM bonds, which are far less expensive than DM. As shown in Chart 5, real yields are positive in EM, lending a buffer to the rise in real yields across developed markets where most real yields still remain negative. The green portion of the bar shows the change in real yield since the sell-off began in mid-June, indicating that LatAm and Asia remained stable while pockets of stress emerged in EMEA, including South Africa and Turkey. 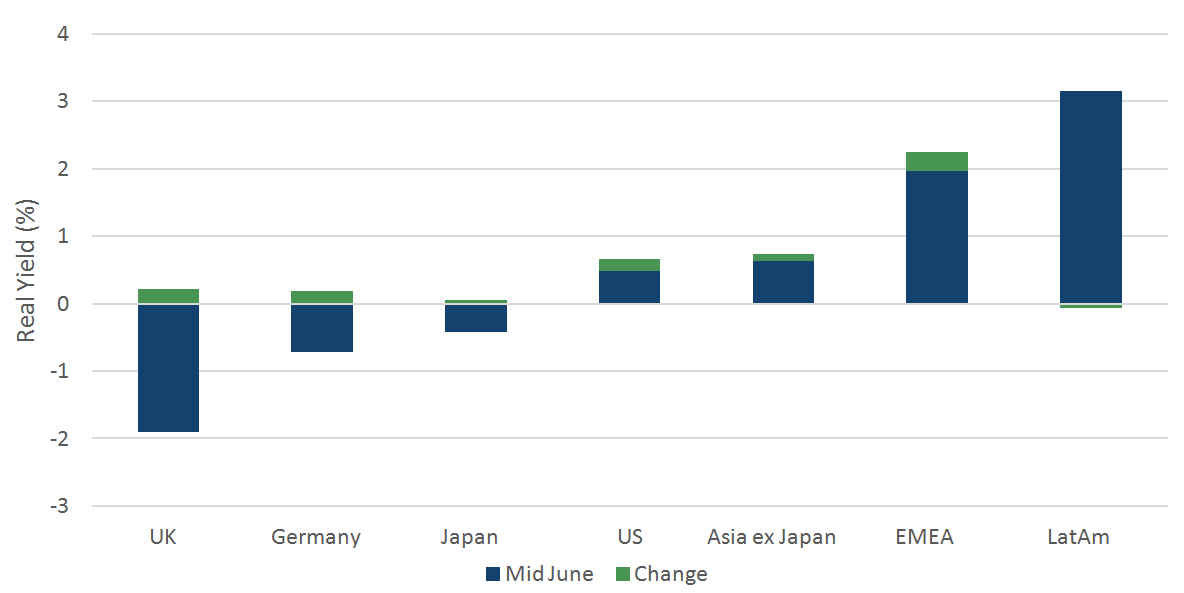 As tighter policy advances into 2018 and the QE impulse begins to decline more precipitously over the next two years, we believe pockets of EM will be increasingly risky – something like the “Fragile 5” during the taper tantrum back in mid-2013 when Fed Chairman Ben Bernanke announced plans to begin winding down QE. However, we might now call it the “Fragile 2”, or possibly the ”Fragile 3”.

The Fragile 5 included Turkey, South Africa, Brazil, Indonesia and India, all of which depended heavily on QE impulse flows to help fund their large current account deficits. As shown in Chart 6, current account deficits have improved across all five countries, making them less vulnerable, but while India, Indonesia and Brazil have managed to push reforms to rebalance their economies, improvements in Turkey and South Africa came mainly from weak growth therefore depressed imports. Political risk is on the rise in both countries with current policies aiming for more imbalanced growth, and, therefore, again wider current account deficits. As liquidity begins to tighten, it is reasonable to assume these two countries are at risk of deeper outflows. Brazil has pushed reforms, but also remains in a precarious position, as fiscal deficits remain wide and reforms slow with still weak political leadership. Further slippage could add it to the fragile lot. 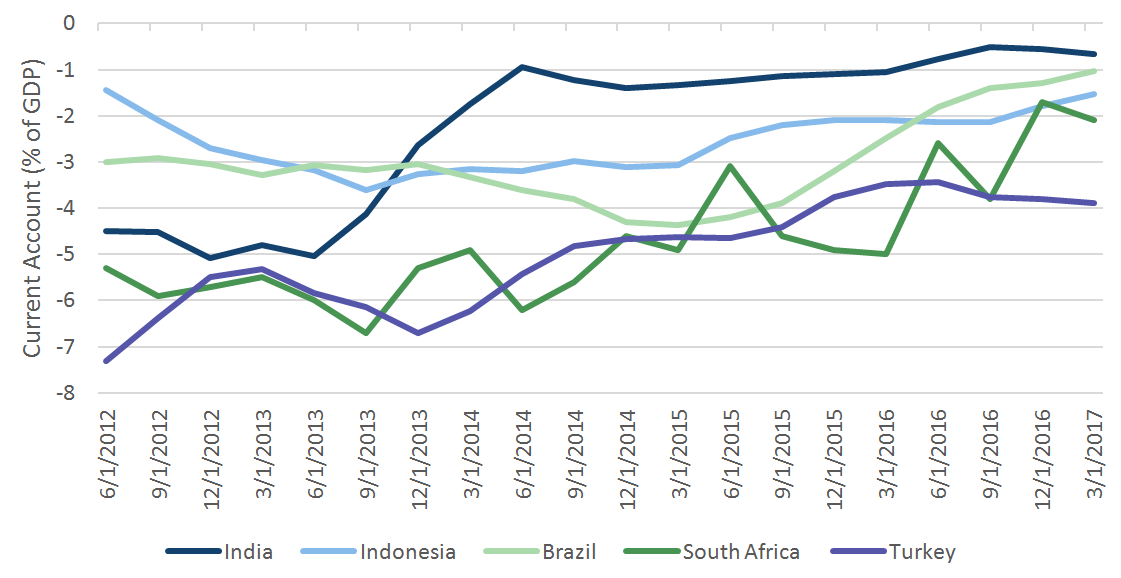 We expect the EM rally will continue on the back of strong growth, but in 2018, performance is likely to diverge, with imbalanced economies that depend on foreign capital flows likely feeling the strain of tighter policy by the Fed and the ECB.

Both CBs intend to shift policy very slowly, and since global growth is broad and policy in China mostly accommodative, the sell-off (mostly confined to EM currencies) caused by CBs suddenly sounding hawkish in late June is unlikely to escalate into a taper tantrum as experienced in 2013. However, the steady removal of balance sheet support will start to become meaningful in 2018, reducing flows to EM with potentially pockets of outflows.

Reforms have reduced the Fragile 5, which were most impacted by the taper tantrum in 2013, to the “Fragile 2” (Turkey and South Africa) or perhaps “Fragile 3” (adding Brazil), for which insufficient reforms leave these economies still highly vulnerable to reductions in foreign flows. It is possible such strains could broaden across the complex if risk appetite turns sufficiently negative but, if this is the case, CBs seem more likely to pull back rather than forge ahead as they will be eager to preserve their policy gains.

Rob is responsible for managing the various Multi-Asset portfolios, forming relative asset views based on team research and constructing portfolios to meet the risk parameters for each mandate.

Prior to the launch of the Multi-Asset effort in Singapore, Rob was a Senior Portfolio Manager with Nikko AM Americas, responsible for asset allocation with a focus on emerging market mandates. He has worked at Nikko AM Americas for over 9 years and has 19 years of experience in the industry.

We are pleased to be bringing you Nikko AM's 2019 Sustainability Report. In it, you will read about our responsibility as an investment manager and fiduciary that contributes to a sustainable society, considering ESG as a part of long-term investment strategies.

Nikko AM has been certified as carbon neutral for the first time, after entering into a carbon offset programme with the UK-based international organisation Carbon Footprint Ltd.