ESG Insights | Who insures the insurers in a global pandemic?

Investment Insights by our experts and thought leaders

All other countries
Share this
by Jason Kim, Portfolio Manager
23 December, 2020

Insurance cover has been the lifeline for families and businesses in times of crisis or disaster. But what about global events such as pandemics and war?

The basic principle of insurance is to allow the transfer of financial risk from an individual to a pooled group of risks by means of a two-party contract. This is particularly important when the value of what is insured is relatively high and is crucial for the insured and, in the event of a total loss, would be unaffordable to replace without insurance. So, from a societal perspective, insurance has a key role to play in protecting the key assets (such as homes) of individuals as well as corporates.

The reasons such exclusions exist is because there are some risks that just can’t be diversified against adequately, such as global pandemics and wars, and as such are very difficult to price for.

For insurance to work effectively, the risks need to be somewhat independent and reasonably diversified. Otherwise, there is the risk that a very large proportion of risks will be claiming at the same time and may result in insurers suffering major losses, which may give rise to risk of bankruptcy for the insurer or potentially for a large part of the industry, depending on the scale of losses. After such an event, it may result in an insurance market that does not function effectively and leave policyholders exposed to greater risks and costs going forward or not being able to purchase insurance at all.

To mitigate this tail risk of very large claims events, insurers will typically buy insurance themselves. This is called buying reinsurance from a reinsurer. This is used quite actively and effectively by insurers against large weather and seismic events. However, reinsurers, despite their global diversity, will generally not provide cover for pandemics and wars, due to the sheer scale of potential losses and/or how widespread they can be. This is why insurers generally have exclusions for pandemics and wars, as they generally can’t protect against it with reinsurance.

While there have been some temporary benefits for insurers in the form of lower motor claims due to mobility restrictions enforced by governments, these have been more than outweighed by concerns that potential claims costs have risen elsewhere.

There are some concerns with respect to landlord insurance as a result of the moratorium on tenant evictions, but the overwhelming impact has been with respect to business interruption insurance.

Business interruption insurance typically covers the shortfall in profits caused by the interruption to a business from insured events. Given the government-induced mobility restrictions, as well as changes in behaviour from the public, many businesses suffered significant loss of business, and this would have included tourism-related businesses as well as restaurants that could not adequately pivot to takeaway, to name just a few.

This uncertainty led to the share prices of the general insurers to fall significantly, despite their businesses being arguably somewhat resilient to economic downturns.

To account for this risk, after assessing the situation, Nikko AM had allowed for significant provisions for potential claims for the insurers. Despite these provisions, the insurers still looked very attractively priced, as it would appear that the market was massively overreacting to this risk.

What’s in a name?

As discussed, typically a pandemic such as COVID-19, would have meant that business interruption insurance would not provide coverage due to it being excluded.

However, virtually all insurers in Australia were a bit tardy on how they enacted this pandemic exclusion. For some reason, a reasonable proportion of business interruption insurance policies referenced the old repealed Quarantine Act 1908, instead of the current BioSecurity Act 2015 (Cth).

While the intent of a pandemic exclusion was clear, referring to the old repealed Act in many policies created significant uncertainty. As a result of this, AFCA (Australian Financial Complaints Authority) and the ICA (Insurance Council of Australia) decided to take a couple of test cases to the NSW Court of Appeal to determine whether the exclusion held when referring to the old repealed Act.

The outcome of the court case was released on the 18th of November 2020. All five judges ruled that COVID-19 claims were potentially payable where reference was made to the old repealed Act, as it effectively invalidated the pandemic exclusion. The ICA has since decided to appeal this decision.

After this court decision, we have seen our two largest domestically focused general insurers, IAG and Suncorp, flag meaningful provisions. In the case of IAG, the scale of their provision for potential business interruption claims were well in excess of AUD 1 billion and required them to raise new equity of AUD 750 million to help fund this. For Suncorp, their provision was a more modest, but still sizeable AUD 195 million, as it would appear that a smaller proportion of their business interruption insurance policies referenced the old repealed Act.

Getting the name of the Act wrong has resulted in major financial consequences for the Australian general insurance industry. For shareholders, this impact was felt much earlier on, when this uncertainty started to become known and impacted the share prices of these insurers.

What does this mean for the insurance industry?

It is hard to say what the ultimate impact of all of this will be for the insurers. Firstly, the industry needs to weigh up the reputational costs of pursuing this court case against the unexpected major costs of paying out these claims and what it means for their financial stability.

Afterwards, there is the potential that insurance premium rates need to rise meaningfully to reflect the fact that commercial insurance (insurance that corporates buy) has produced very poor profitability for quite some time in Australia, even despite some sizeable increases in small pockets of loss affected areas such as professional indemnity insurance. It may well be that this event will be the catalyst for this to some extent. The last time we saw very significant increases in premiums for commercial insurance in Australia more broadly, was post the HIH/FAI collapse in 2001.

This material was prepared and is issued by Nikko AM Limited ABN 99 003 376 252 AFSL No: 237563 (Nikko AM Australia). Nikko AM Australia is part of the Nikko AM Group. The information contained in this material is of a general nature only and does not constitute personal advice, nor does it constitute an offer of any financial product. It does not take into account the objectives, financial situation or needs of any individual. For this reason, you should, before acting on this material, consider the appropriateness of the material, having regard to your objectives, financial situation and needs. The information in this material has been prepared from what is considered to be reliable information, but the accuracy and integrity of the information is not guaranteed. Figures, charts, opinions and other data, including statistics, in this material are current as at the date of publication, unless stated otherwise. The graphs and figures contained in this material include either past or backdated data, and make no promise of future investment returns. Past performance is not an indicator of future performance. Any economic or market forecasts are not guaranteed. Any references to particular securities or sectors are for illustrative purposes only and are as at the date of publication of this material. This is not a recommendation in relation to any named securities or sectors and no warranty or guarantee is provided.

Receive our latest ideas in your inbox Nikko AM produces a monthly newsletter highlighting our freshest investment insights. Subscribe now

With 25 years’ experience in the industry, including 22 years in funds management and three years with the Commonwealth Public Service, Jason is a respected portfolio manager and senior equities analyst. Before joining Nikko Asset Management, Jason worked with ASSIRT and Deutsche Funds Management as a quantitative analyst and portfolio manager focusing on strategic asset allocation, managed funds research and risk control. Jason is Co-Portfolio Manager for the Nikko AM Australian Share Wholesale Fund, Nikko AM CVA Plus Strategy and Nikko AM Australian Share Concentrated Fund. 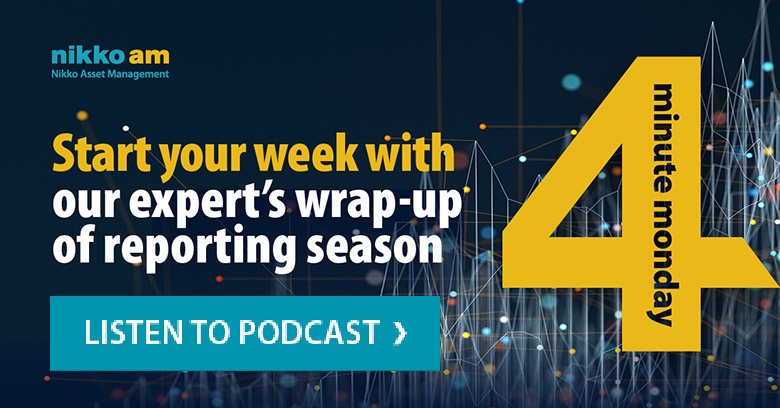