Investment Insights by our experts and thought leaders

Our approach to investment is centred on fundamental analysis of a company’s business and the industry in which it operates. This includes an assessment of all opportunities and risks that could impact a company’s profitability, including ESG factors, as they have the potential to materially impact a company’s earnings and valuation.

Harvey Norman has poor corporate governance, with a slew of issues contributing to this. The main issue, which is highly publicised, is the lack of an independent Board. The ten-member Board consists of five executives including the major shareholder Gerry Harvey as Executive Chairman and his wife Katie Page as the CEO. Of the remaining five Board members, one is Gerry Harvey’s son, who has been involved with the company since 1989. One has been on the Board since 1987, one since 2003 and another since 2005. Four of the five non-executive directors cannot be counted as independent due to their extremely long tenure. Their association with the company ranges from 16 to 39 years. For context, a director who has been associated with a company for 10 years or more is generally not considered independent. This leaves one potentially independent director.

Parties including Gerry Harvey and associates are estimated to hold over 50% of the register. In conjunction with the almost complete lack of independence on the Board, we believe the interests of minority shareholders are unlikely to be a priority. From our discussions with Gerry Harvey, we formed the view that he considers an investment in Harvey Norman to be an investment in his company.

The consequences of poor governance

There have been two obvious consequences of the Board prioritising the views of the founding shareholder over the views of general investors. The first is the investment into businesses that are not related to the core retail operations of the majority of the company. The second is the accumulation of a large property portfolio.

The investment into various speculative operations over the last ten years has led to large losses for the company. The most high-profile speculative investment was into a dairy farm. This business went into administration after costing circa $70 million of Harvey Norman capital. The other large loss-making investment was a school supplies business for which the combination of equity accounted losses and impairment of loans and investment totaled more than $70m. In total, losses of over $150m were incurred on the dairy farm (Coomboona, 2016-19), school supplies business (KEH Partnership, 2013-19) and a mining camp accommodation business (QCV, 2015-17).

While aggregate loss of $150m is not insignificant, it is not considered catastrophic in the context of the current market capitalisation for the company, which is circa $7 billion. However, it is likely that these periodic speculative investments outside of the core operations of the company do weigh on the multiple investors willing to invest.

What has had a greater impact on shareholder value, in our view, is the investment into a property portfolio.

The negative effect of the property portfolio

Harvey Norman has had a history of property development. There is a synergy between the development of the property and the operation of stores within that development, as securing a large tenant reduces the leasing risk. This has created value for shareholders. What has reduced shareholder value is the continued accumulation of property on the balance sheet.

Gerry Harvey has expressed a view that property investment reduces the risk of the company during cyclical downturns. This is true if the value of the properties is not related to the success of the retail business. However, for Harvey Norman, if there was a significant retail downturn and the retail operations fell into losses, this would have a significant impact on the property portfolio. If the store network was reduced in size, the loss of these tenants of the property portfolio would have a negative impact on the value of the portfolio. So, while property is a lower risk asset, combining the property with the retail tenant in the same investment vehicle has dis-synergies, as it makes the combined group riskier. Therefore, we believe that Gerry Harvey’s view that owning properties and their tenants in the one investment vehicle reduces risk is wrong.

The charts below show the average forward PE for the last 15 years for Harvey Norman (HVN) and JB Hi-Fi (JBH). The significant fact is the average PE for JBH has been higher than for HVN, despite the lower overall risk of HVN due to its property portfolio.

The value of good governance

The upside from splitting the business into retail operations and property assets can be estimated.

The retail operation of HVN is comparable to JBH. Arguably, it is at less risk from online competitors like Amazon due to the bulky nature of the products and the preference of customers to look at large items such as furniture, flooring and bedding. While a case can be made that HVN’s retail operations deserve a higher multiple than JBH, for the purposes of this exercise it is sufficient to use the same.

By applying the JBH PE of 14.2x to HVN’s earnings excluding property, and valuing the property at book value, the HVN PE would be 15.9x. This is an increase of 19% or $1.3bn based on the current market capitalisation.

Chart 3. Estimated PE of Harvey Norman with its property assets spun out 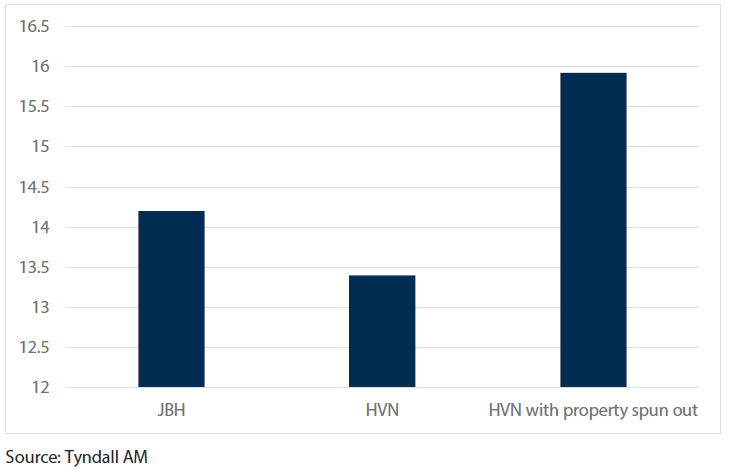 The uplift in value would be significant if Harvey Norman structured the company in a manner which would unlock the attractiveness of the property assets.

In light of this upside, we engaged with Gerry Harvey (Chairman) and Katie Page (CEO). We were able to present these arguments to them and enjoyed a robust discussion, but ultimately Gerry Harvey took the view that he did not want to pursue any structural changes to HVN.

Receive our latest ideas in your inbox Nikko AM produces a monthly newsletter highlighting our freshest investment insights. Subscribe now

Craig joined the business in 1995. He has 21 years’ experience, including 19 years in funds management and two years as an accountant.

Craig started his career as a Graduate Accountant with Hong Kong Bank and then changed careers to become an investment analyst with the business, where he could better apply his analytical skills. Craig has analyst responsibilities for the Retail, Food & Beverage, Banks and Telecommunication Services sectors.